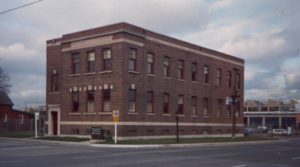 Designated under the Ontario Heritage Act, 2008. Designed in Edwardian Classical style by Montreal architect W. J. Carmichael, this building was constructed to accommodate the switching equipment, switchboard operators, and technicians needed for Bell Telephone’s rapidly expanding service in this area. Prior to automated call routing, operators would direct each telephone call to its requested number. The first local phone calls were routed from a drug store in New Toronto, where a switchboard was in operation by 1914. By 1925, Bell Telephone employed 26 people in the area, and one year later, this new facility was completed on an increasingly industrial section of Birmingham Street. By 1929, fifty-two staff worked here, and handled a daily average of 13,000 phone calls in an area including Humber Bay, the Towns of Mimico and New Toronto, and Long Branch. This Bell Telephone Company building was extended to the east in 1948, and continued to serve Bell until 1981.